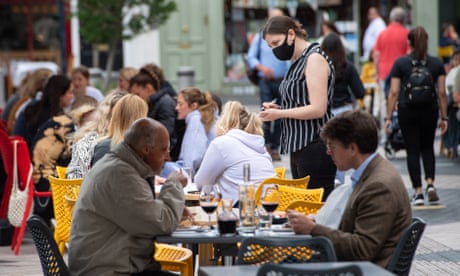 Sony is among those companies whose results have beaten expectations, which has been helping to drive global stock markets higher.

In the case of the Japanese entertainment and electronics conglomerate it’s thanks to ongoing demand for the PlayStation 5 games console, which at times is outstripping supply. Consumers have been clamouring for home entertainment throughout the pandemic.

The firm is anticipating that prospects for its music, movies and electronics divisions will continue to improve as the global economy emerges from the pandemic.

However, like many companies from technology firms to automakers, Sony is also feeling the impact of the global shortage of semiconductors.

You can read Jillian Ambrose’s article on Sony’s results here:

And if you’d like to read more on the shortage of semiconductor chips, here are a couple of earlier reports on the problems, and the impact on industry.

Reaction to the UK’s services PMI data from the economic forecasting group EY ITEM Club – it suggests inflation is likely to move higher in the second half of 2021, hitting 3.5% in later 2021, but this will only be temporary.

Given the growth business activity, the group anticipates further strong GDP growth between July and September.

The pace of activity growth has continued to slow, which is likely to reflect the notion that the biggest gains from reopening are now behind us. The PMI may also have been negatively affected by the rise in COVID-19 infections during July, which required growing numbers of people to self-isolate.

Beck is not too worried about inflation and doesn’t believe the Bank of England needs to be either, ahead of its meeting tomorrow.

While the EY ITEM Club is cautious about these results, given the survey has tended to overstate price pressures in the past, inflation is likely to reach around 3.5% on the CPI measure in late 2021. But the EY ITEM Club remains confident that this rise will prove transitory and expects the majority of the MPC to take a similar view at tomorrow’s meeting.

The upgrade in profit guidance from Taylor Wimpey has boosted its shares this morning, making the housebuilder the highest riser on London’s FTSE 100.

Taylor Wimpey’s shares are currently up 3.7%.

Insurer Legal & General is also among the biggest risers on the FTSE 100, climbing 2.6%.

European stock markets are almost all in positive territory this morning, with the exception of Spain’s Ibex which is looking flat.

Global stock markets have been boosted by a string of strong corporate earnings, while the vaccination rollout in most developed economies is also calming some nerves over the pandemic. However, some concerns persist over the re-emergence of Covid-19 cases and the spread of the Delta variant in Asian countries including China.

Taylor Wimpey, one of the UK’s biggest housebuilders, has returned to profit and upgraded its earnings targets after building a record number of homes in the first six months of the year.

The High Wycombe-based firm built more than 7,300 homes in the first half of 2021, almost all of which have been pre-sold, allowing the company to lock in the benefit of soaring house prices triggered by cheap loans, the government’s stamp duty holiday and a pandemic-driven preference for larger houses.

The FTSE 100 housebuilder reported a pre-tax profit of £287.5m for the six months to early July after a £40m loss in the same period last year in the wake of the coronavirus pandemic.

Pete Redfern, Taylor Wimpey’s chief executive, said the company expects to complete between 13,200 and 14,000 houses in 2021, and reach an operating profit for the year of about £820m.

In other euro zone news – retail sales in the bloc continued to rise in June, but less quickly than in May after shops reopened following the easing of coronavirus restrictions.

Retail sales in the 19 countries which share the euro rose by 1.5% month-on-month in June, according to official data from Eurostat, the EU’s stats office. This was 5% higher than a year earlier.

Retail sales didn’t rise across the board in the euro zone.

The timing of shop reopening also appears to have played a role. Retail sales rose most steeply in Ireland, Germany and Latvia, but were lower in countries including Portugal, Austria and Malta.

Staffing shortages and supply chain disruptions also impacted firms in the euro zone last month, although business activity in the bloc grew at its fastest pace in 15 years.

The IHS Markit final composite PMI for the 19 countries which share the euro rose to 60.2 in July, up from 59.5 in June and the highest level since June 2006.

The reading for the euro zone’s service sector also hit its highest final reading since June 2006, after many service businesses across the region reopened.

Among the four largest eurozone economies, the quickest rise was in Germany, where again the rate of expansion accelerated to a record high. In Italy, private sector activity growth jumped to a three-and-a-half year high, while Spain and France registered softer increases in output.

Incoming data from the UK – the July services Purchasing Managers’ Index (PMI) has come in above forecast, but still marks a slowdown in the recovery.

The seasonally-adjusted IHS Markit/ CIPS UK Services PMI came in at 59.6 for July. higher than anticipated, but a drop from 62.4 in June. A reading over 50 shows growth rather than contraction.

This marks an increase in activity for the fifth month running for UK service businesses, however it’s also the weakest rate of growth seen since March and the end of the winter lockdown.

What’s holding things back? Shortages of both staff and supplies.

Businesses grappled with staff absences as a result of the “pingdemic”, when workers were told to self-isolate after contracting or coming into contact with someone with Covid-19.

Services firms have also been struggling to recruit enough staff, sometimes after workers left unexpectedly, while they also had difficulty finding people with the right skills for the job.

Many firms responding to the survey said they’d seen strong consumer spending, and also a recovery in demand for business services, but self-isolation rules had knocked sales.

Staff shortages and supply issues were a severe constraint on business capacity, which led to another strong rise in backlogs of work. Tight labour market conditions led to greater wage pressures across the service economy and this contributed to the fastest increase in overall input costs since the survey began in July 1996.

We’ve been writing about the problems of staff shortages for hospitality businesses for some time, such as this article from Sarah Butler last month:

The Manchester-based online firm, which listed last year, already sells directly to consumers through websites such as Lookfantastic, Glossybox and Zavvi, as well as sports nutrition company Myprotein, and racked up £1.1bn of revenues in 2019.

THG said Cult Beauty would add around £140m of net sales to it business in 2022.

Cult Beauty calls itself “the insider’s guide to the best beauty products” and was co-founded by former model and PR Alexia Inge in 2008.

THG is only slightly older, having been founded by Matthew Moulding in 2004. THG listed on the London stock market in September last year, in a flotation which valued it at £4.5bn.

This is the view of equity analysts at broker Jefferies of THG’s latest acquisition:

Cult is an authorised retailer for c.300 prestige third-party brands, two-thirds of which are not currently listed on existing The Hut Group beauty sites. The deal will also enable THG to expand Cult’s overseas presence, given <50% international sales. Demographically Cult Beauty is at the younger end of the market, with a clearer bias to indie brands.

If you want to know more about The Hut Group, see some of the Guardian’s previous coverage of the growing e-commerce company, including the recent deal it struck with Japanese investment bank SoftBank:

More passengers took to the skies with Ryanair in July.

The number of passengers carried by the Irish airline doubled from 4.4m people in June to 9.3m in July.

Just a few days ago, the airline said it had seen a surge in bookings in recent weeks, thanks to the rollout of EU digital Covid certificates last month, as well as the scrapping of quarantine for fully-vaccinated people arriving in the UK from the EU.

Ryanair’s shares are also flying slightly higher in early trading, and are nearly 1% up.

Concerns about the Delta variant don’t appear to be weighing on Asian stock markets today, which have been moving towards one-week highs.

After a hesitant start to trading in Asia, stocks had bounced back by mid-morning.

MSCI’s index of Asia-Pacific shares outside of Japan remains in positive territory, although it has slipped a bit from earlier gains of over 1%.

Data overnight from China showed that the country’s services sector accelerated in July, hitting its highest level since May, although the spread of the Delta coronavirus variant in the country is threatening the recovery.

The Caixin /Markit services Purchasing Managers’ Index (PMI) climbed to 54.9 in July, up from 50.3 the previous month. Any reading over 50 represents monthly growth rather than contraction.

The survey, which tends to focus on smaller firms in China’s coastal regions, contrasted with official data which had showed a slight slow-down in Chinese services data in July.

The services sector in the world’s second-largest economy hasn’t rebounded from the pandemic as quickly as its manufacturing sector, but domestic consumption has been picking up, which has helped.

However a recent rise in coronavirus infections and the spread of the Delta variant remain a dark cloud on the horizon.

This is the view of Michael Hewson, chief market analyst at CMC Markets UK:

Concerns that rising infection rates across Asia, and in China especially, appear to be causing anxiety that the rebound story in that part of the world is about to become the weakest link in the global recovery story. Not only are we hearing about more cases in China, but we are also getting an acceleration of cases across Indonesia and Thailand, as the virus hunts out the parts of the global economy with low vaccination rates.

The spread of the Delta variant in several Chinese cities is already knocking the domestic tourist industry, as local authorities are asking people not to travel to reduce infections.

Will China set the pace for the rest of the world? We’ve got a day of services PMI data coming up – kicking off with the euro zone and the UK later this morning, and followed by the US.

Analysts seem to have fewer concerns about European economies for the time being, thanks to higher vaccination rates across the region.