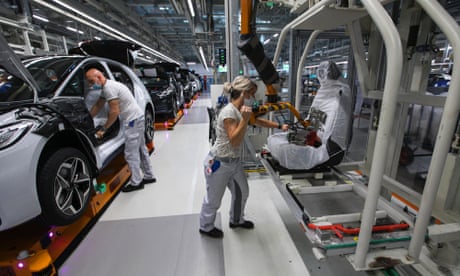 Wall Street has been in and out of the red this week, as easing bond yields prompted investors to pile back into technology stocks, away from energy and financial stocks, whose fortunes are more closely linked to the economy.

Oil prices are still up sharply after a large container ship ran aground in the Suez Canal and blocked it. Brent and US crude are both up around 4%, at $61.16 and $60.08 a barrel respectively.

UK inflation slowed in February to 0.4% from 0.7% in January, as the third coronavirus lockdown brought with it a wave of discounting by clothing retailers and secondhand car dealers, according to official figures.

Britain’s economy returned to growth in March, according to surveys, as businesses stepped up preparations for the easing of lockdown, lifting optimism in the services sector to the highest level since 2004. The eurozone’s business sector also returned to growth for the first time in six months, but with fresh lockdowns in place across Europe, economists are not expecting the economy to bounce back until the second half of the year.

Even so, consumer confidence rose to an 11-month high in March, according to the European Commission’s flash indicator.

Ryanair has revealed plans to increase the number of its flights to 80% of pre-pandemic levels by July, as the airline’s chief executive criticised UK government for warning against booking overseas summer holidays this year. Michael O’Leary said he was “very confident” that Britons would be “going to the beaches of Europe” thanks to the UK’s rapid vaccination programme.

The Harry Potter publisher Bloomsbury has issued its second profit upgrade of the year, lauding a lockdown reading boom, but the trend may not endure as coronavirus pandemic restrictions are lifted through the summer.

Almost 60,000 frontline workers at BT will receive a special bonus of £1,500 from the company in recognition of their work during the coronavirus pandemic.

A Goldman Sachs junior banker has spoken out over ‘18-hour shifts and low pay’ at the US investment bank.

Thank you for reading. We’ll be back tomorrow! – JK

US Treasury secretary Janet Yellen and Fed chairman Jerome Powell are continuing their testimony before US Congress (from yesterday) — you can watch live here.

Adam Button, chief currency analyst at Forexlive, has been watching.

Powell is doubling down, saying the rise in bond yields reflects an improved outlook. He also repeats that he would be concerned if it were not an orderly process or if conditions tightened enough to threaten the recovery.

GSK has fired Moncef Slaoui –- who served as scientific head of the US vaccine programme Operation Warp Speed during the Trump administration — as chairman of its venture Galvani Bioelectronics. An investigation by a law firm, commissioned by GSK, found that he sexually harassed a GSK employee several years ago.

He is the former head of GSK’s vaccines department, and worked for the drugmaker for 30 years.

GSK said in a statement:

The board of directors of GlaxoSmithKline, the majority shareholder of Galvani Bioelectronics, today announced the termination of Moncef Slaoui as chair of the Galvani board of directors, effective immediately.

Dr. Slaoui’s behaviours are wholly unacceptable. They represent an abuse of his leadership position, violate company policies, and are contrary to the strong values that define GSK’s culture.

In the markets, German 10-year government bond yields fell to a five-week low today, as traders worried over tighter lockdown restrictions (extended until 18 April) to contain a fresh wave of Covid-19 infections. This has encouraged a return to safe-haven bonds (and when prices rise, yields fall).

The European Central Bank has also been purchasing more bonds as it ramped up its stimulus efforts to restrain rising bond yields/borrowing costs. It bought €28bn of bonds last week across its stimulus programmes, an increase of almost 50% and the biggest weekly amount since 4 December.

Bond yields had been rising in the eurozone (and the UK and US) largely due to higher growth and inflation expectations for the US, rather than a brighter outlook for the eurozone.

Service firms recorded the steepest increase in new business for almost three years amid stronger client demand and looser coronavirus restrictions. The combined increase in manufacturing and service sector new orders was the strongest since September 2014.

Another impressive expansion of business activity in March ended the economy’s strongest quarter since 2014. The vaccine roll-out, the reopening of the economy and an additional $1.9 trillion of stimulus all helped lift demand to an extent not seen for over six years, buoying growth of orders for both goods and services to multi-year highs.

Producers were increasingly unable to keep pace with demand, however, due mainly to supply chain disruptions and delays. Higher prices have ensued, with rates of both input cost and selling price inflation running far above anything previously seen in the survey’s history.

US business activity continued to expand in March, powered by service sector firms, while input shortages (such as materials, PPE and fuel) and supplier delays held back factory output, according to the flash PMI surveys from IHS Markit.

Adjusted for seasonal factors, the IHS Markit flash US composite PMI output index posted 59.1 in March, down slightly from 59.5 in February, to signal the second-fastest private sector upturn for six years.

Wall Street has opened higher ahead of the Markit business surveys, which are due in just over five minutes.

James Knightley, chief international economist at ING, has looked at the US durable goods figures.

Virtually all February data has disappointed as winter storms and cold conditions took their toll on supply chains and kept people inside. Today’s durable goods report was no different, but the data will all bounce strongly for March given massive fiscal stimulus and record low customer inventories.

Bad weather is likely to have been a key factor here with all sectors witnessing declines aside from electrical equipment (+0.2% MoM). If you were experiencing slower production due to storm disruption you obviously need to order less for the next month. ISM orders figures remain very firm so March should rebound strongly on more seasonal weather patterns.

However, there are other issues such as the global semi-conductor shortage, which is impacting vehicle production around the world given they are in anything from brake sensors to satellite navigation to parking assistance systems. If you can’t get enough semi-conductors then you order less of everything else as well, be it steel or tyres – note that vehicle and parts orders fell 8.7% MoM. Assuming this can be resolved soon, orders should also bounce back.

The fall in durable goods orders in February was mainly due to the disruption caused by the severe winter storms, which we already know weighed heavily on manufacturing output last month. The latest surveys point to a rebound in March and suggest that business equipment investment growth is set to remain unusually strong.

In Germany, chancellor Angela Merkel’s cabinet has approved an extra budget of €60bn, as the government battles a third wave of coronavirus infections caused by more infectious variants. This will lift new borrowing to a record high of more than €240bn this year, according to a government official, Reuters reported.

Orders for US durable goods unexpectedly fell in February, by 1.1% while economists had expected a 0.5% increase.

This is a soft report and the first big miss in awhile but the market reaction has been minimal. This is the first decline since last April so the market is likely to forgive it, especially if the Markit manufacturing survey at 1345 GMT is strong.

Some thoughts on the John Lewis closures…

Hagens Berman, a US law firm, filed particulars of the claim at London’s high court on Tuesday alleging that Daimler, Mercedes-Benz’s owner, put “defeat devices” that artificially lowered emissions when the car detected it was being tested.

The company, which reported it first ever full-year loss earlier this month, said it would also close four ‘at home’ stores, in Ashford, Basingstoke, Chester and Tunbridge Wells, as well as the four city centre department stores.

The latest closures come after John Lewis closed eight stores in 2020 amid a shift to online shopping, which has been accelerated by the Covid-19 pandemic. Online trading now accounts for three-quarters of the department store’s sales.

Taiwan has ridden out the coronavirus pandemic mostly unscathed, while Britain has been crippled economically and in human terms – a tale of two island nations, told by Emma Graham-Harrison and Helen Davidson in Taipei.

Taiwan’s leaders, helped perhaps by having an epidemiologist as vice-president, perhaps by its experience of the outbreak of the Sars coronavirus in 2003, recognised the terrible threat posed by Covid-19, even as the earliest data trickled in. They decided the only way to protect their country, its people and economy, was to keep the virus out.

Almost 60,000 frontline workers at BT will receive a special bonus of £1,500 from the company in recognition of their work during the coronavirus pandemic, writes Joanna Partridge.

In addition, the workers, who include engineer and customer service centre staff, will receive a further £500 in shares, which will be awarded after three years as part of the employee share scheme.

European markets are on the back foot in early trade despite the helping hand a weaker currency and impressive PMI numbers might provide. Instead, we are seeing a continued focus on the potential impact a third wave could have upon market sentiment, with the reflation trade coming into question as a result.

Declines in Treasury yields over the course of this week signal a shift in tactics, with confidence of a straight-forward recovery certainly on the wane. Instead, we have seen traders head for the havens on the prospect of fresh lockdowns and prolonged restrictions, driving assets such as the dollar, yen, gold, and bonds higher.

Nevertheless, while markets are becoming increasingly hesitant, the ongoing vaccination push and economic recovery do still mean we could see buyers come in when markets provide discounts.