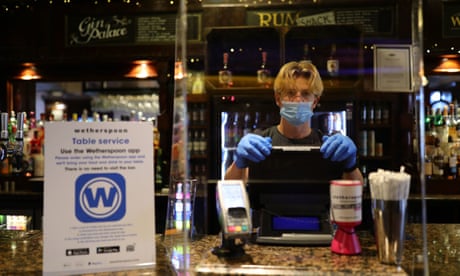 Multimillioniare Philip Day has backed a deal to keep his Peacocks fashion chain afloat – saving 2,000 jobs and just under half of the chain’s 423 stores, our retail correspondent Sarah Butler writes.

The deal comes after more than 200 Peacocks stores closed with the loss of more than 2,000 jobs when the chain called in administrators in November last year.

On Tuesday, EWM Group, the private investment firm controlled by the Day family, said it was providing a deferred loan to a management buyout of Peacocks led by Steve Simpson, the chief executive of Edinburgh Woollen Mill and Day’s right-hand man.

The buyout is also being supported by a group of unnamed Middle East investors, understood to be associates of Day, who are providing working capital to help support Peacocks’ return to trading.

The Cardiff-based budget fashion chain, which Albert Peacock founded as a penny bazaar in Warrington, Cheshire, in 1884, was part of Day’s EWM Group, which included Edinburgh Woollen Mill, Jaeger and Ponden Home. The Jaeger brand was bought by Marks & Spencer in January.

BP has cut its debt faster than expected after a “very strong” first quarter, in which it was able to sell off almost $5bn worth of its assets.

BP chief executive Bernard Looney told investors this morning that net debt fell from $38.9bn at the end of 2020 to $35bn, a target BP had hoped to reach by the end of this year or even early next year.

It was able to pay off debt quicker than expected after selling $4.7bn worth of assets in the first quarter and a “very strong business performance”, he explained.

BP’s fast-falling debt could spell a cash windfall for its shareholders after it slashed dividends last year. BP had warned that it would not begin share buybacks until it reached the $35bn debt threshold.

Shareholders can expect more details on potential share buybacks when it reports its first quarter results on 27 April.

Prime minister Boris Johnson has given some fresh comments about the AstraZeneca vaccine and the rollout of vaccine passports.

According to Reuters, Johnson has said that that the continued advice is to get your shot.

On vaccine passports, he’s said no Covid certificates will be needed once restrictions are eased further on 17 May.

He said the government is looking at the role of Covid passports for overseas travel and the kind of signals you can provide to prove you are not contagious.

Johnson adds that the wants to make things as easy as possible for Covid tests for travel.

However, the prime minister stressed that the government has to be prudent on international travel.

RLS is nowhere near as generous as the other schemes – particularly bounce back loans, which was aimed at the smallest businesses and came with a 2.5% interest rate cap.

But in an apparent effort to wean businesses off of Covid support, the Treasury has set the following terms, that will be managed by participating banks:

John Lewis is reopening its changing rooms in England for the first time in a year when the high street lockdown ends next week.

The department store is expected to be joined by many other clothing retailers who are taking advantage of a change in government guidelines, which previously urged the closure of fitting rooms during the pandemic.

John Lewis will also be resuming services including children’s shoe fitting, click & collect and beauty packaging recycling at the stores which have been closed since December.

However, only 34 of its shops will reopen after the group announced the permanent closures of eight stores, including Peterborough and York, last month.

Fund manager M&G has announced that its chairman Mike Evans has stepped down to concentrate on his health.

The chairman took a temporary leave of absence at the beginning of the year due to a stress-related illness, but stepped down permanently on 1 April.

He said in a statement:

While I am making good progress on my recovery, I do not feel that I would be able to return to the business before the end of the year.

I have therefore decided, in the best interests of the company and to ensure good governance, that I step down as chair.

The firm, which manages £367.2bn worth of assets and split from Prudential in 2019 , said it would immediately start a search for his replacement.

A weaker pound is helping lift the FTSE 100, since multinational businesses listed on the blue chip index tend to benefit financially when the UK currency is weaker (since it translates into higher revenues).

Profit taking and some new short positions are the culprit, according to Stuart Cole, chief macro strategist at Equiti Capital. The pound has otherwise been rising on the back of Covid restrictions being eased.

It is the reopening of London this morning that is seeing sterling under some initial pressure, as sellers have returned to take advantage of the rally seen over the last 24 hours or so.

The last rise in UK leisure stocks has helped push the more domestically-focused FTSE 250 to pre-pandemic levels, with the index now edging towards the all-time high reached at the start of 2020.

The domestically-focused FTSE 250 is up another 1% to above 22,000, moving closer the Jan 2020 all-time high as the UK’s economic recovery and exit from lockdown remains on track.

Reopening favourites Cineworld, Carnival and National Express were all up about 5%.

There may be some profit taking in the US, where the S&P 500 and Dow both hit record highs last night.

US futures are pointing to a lower open on Wall Street this afternoon:

Speaking to the Today programme on BBC Radio 4 this morning, the UK’s vaccines minister Nadhim Zahawi confirmed that vaccine passports will not immediately be required as England’s economy re-opens but their use is still on the table.

As the Prime Minister, explained yesterday, you’re not going to be required to have a certificate to go to the pub garden on Monday, or inside the pub in May.

But I think it’s only right and responsible to look at all options available to us to be able to reopen the economy in a safe way as possible, as other countries are doing, [otherwise] I’d have to come to our programme explain why we haven’t done this.

However, he acknowledged that the proposal raised “ethical” questions for people who haven’t or perhaps cannot get the vaccine for a variety of reasons.

Domestically, it does raise a number of ethical issues which is why the Prime Minister has asked Michael Gove to look at and review this and Michael has been consulting with parliamentarians with stakeholders on this issue.

And of course we’re gonna run the pilots, the FA Cup Final, the semi final where initially, we will look at testing technology to see whether we can have mass events.