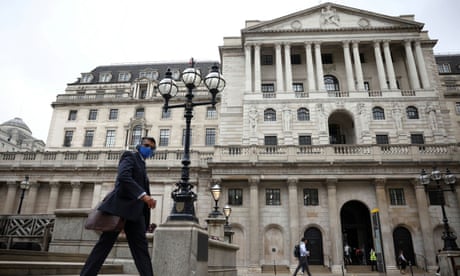 TP ICAP Group, the world’s largest inter-dealer broker, has blamed the move to home working and Brexit for a drop in trading volumes that hit its profits in the first six months of 2021.

In its half-year results today, TP ICAP says the markets have continued to be “uncommonly quiet” in the first half of this year.

It pins some of the blame on the pandemic, which forced its clients to work remotely with “reduced risk limits”. It also cites the government and central bank stimulus packages which have flattened yields, and efforts to comply with post-Brexit trading rules.

TP ICAP, which brings together buyers and sellers in the financial, energy and commodity markets, says:

The traders that generally would be taking more risk have not been really able to take as much risk,” said Joanna Nader, TP ICAP’s global head of strategy, via Bloomberg.

“They’re working from home, it’s not as easy to supervise them — and so banks have generally taken the view that they want them to have lower risk limits.”

“Hopefully, when people start returning to the office we start to have a more normal type of environment,” she said.

“When asset managers come back to the office and start taking more views on the markets and on their funds, then that translates into more dealer activity.”

Shares are down 9% so far today, the worst performer on the FTSE 250, to their lowest since last November.

The City is taking Michael Saunders’ comments about future rate rises in their stride – with little market reaction.

As Bloomberg points out, he is the Bank’s most hawkish member – and he’s only hinted at limited rate rises today:

The Bank of England’s most hawkish policy maker says even if interest rates rise in the next year, it’ll be a limited shift.

Michael Saunders, the Monetary Policy Committee’s sole dissenter at the U.K. central bank’s August meeting, said that if the economy evolves as forecast, it might be right to think rates will go up in the next year or so. The BOE’s current policy stance risks “persistent inflation overshoot versus the 2% target” due to pressure from global costs and domestic capacity pressures, he said.

Still, if the key rate does rise, it won’t be by much, given that the bout of above-target price growth this year is expected to be temporary, and that the neutral level of interest rates has fallen significantly over the past 20 years, he said.

“It’s not clear we would even need to get back to neutral,” he told an online briefing.

“The eurozone economy continued showing signs of a strong recovery with growth of 2.2% Q/Q in Q2. Additionally, the employment rate rose 0.7% Q/Q for the same quarter vs -0.2% in Q1 and these numbers come one week after the Euro CPI raised to the highest level in nearly a decade (3.0%). While euro-area central bankers have been mostly united behind the measures taken to sustain the eurozone through the Covid-19 recession, the return towards normality is splitting the consensus with the hawkish central bankers starting to raise their voices for a scaling back of the stimulus.

“The Governing Council will need to assess on Thursday whether the spread of the Delta variant continues to be a threat or if a slower pace of the bond purchases is needed to get inflation under control. Nevertheless, risk continues to be on the table as the pandemic is leaving a legacy of high debt and weak balance sheets, and a scaling back of the stimulus could disrupt the funding market and the unveven recovery of the eurozone.

“EURUSD traded higher after the release of the data and is approaching to the 1.19 physiological resistance level.”

More deal news… The Times are reporting that 888 Holdings has won the race to acquire William Hill’s European operations after outbidding Apollo Global Management with an estimated bid of more than £2bn.

Speaking of takeovers….Business secretary Kwasi Kwarteng has ordered a national security review of a takeover by a Chinese academic of a small Welsh manufacturer of graphene – the thinnest and lightest “supermaterial” known.

In a rare move, Kwarteng instructed the Competition and Markets Authority (CMA) to review the planned takeover of Perpetuus Group by Taurus International or any companies associated with Dr Zhongfu Zhou.

Zhou, who is listed as “chief nanotechnology scientist” on Perpetuus’s website, has business interests in China and has spent years working on the wonder material.

Perpetuus, which has three sites in south Wales, makes graphene and carbon nanotubes, materials that are hoped to have useful applications in an array of industries ranging from electronics and defence to medicine and making super-strength condoms.

The materials are extraordinary electrical conductors and can be stronger than steel.

Inward mergers and acquisitions (M&A) – which means foreign companies buying UK firms – increased from £8.3bn in the first quarter of 2021 to £27.7bn in the second.

Data from the Office for National Statistics (ONS) shows that inward M&A reached its highest point since the last three months of 2018 – when Comcast’s £30bn takeover of Sky pushed the quarter’s total to to £33.3bn.

Between April and June this year there were two big deals, both run in part out of North America.

And in April, US company Allied Universal beat Canada’s GardaWorld in the race to buy London-listed security company G4S for £3.8bn.

But a series of more recent deals, some of which have been agreed but have yet to complete, and others that are still in the bidding process, are not included in this data.

This includes the potential £7bn sale of Morrisons to a US private equity company, and the controversial £1bn deal for cigarette giant Philip Morris to buy inhaler-maker Vectura.

Bids are also in for two defence contractors – Ua Electronics has agreed to be bought for £2.6bn, while Meggitt has received a bid for around £7bn.

John Laing has accepted a £2bn from US private equity companies, while CVC has agreed a £767m takeover of Stock Spirits.

According to data from Refinitiv, buyout companies across the world have been heavily targeting UK firms, putting around 10% of their total spend here over the first six months of the year.

According to the ONS data, outward M&A – UK companies buying foreign firms – reached £6bn in the second quarter, up from £1.7bn the quarter before.

The eurozone economy recovered more rapidly than thought from its winter lockdowns.

Updated GDP figures show that the eurozone expanded by 2.2% in April-June, up from a first estimate of 2%.

Shortages of semiconductors and building materials have hurt investor confidence in Germany.

The ZEW economic research institute has reported that its gauge of economic expectations fell to 26.5 in September from 40.4 in August, a larger fall than expected.

ZEW President Achim Wambach said in a statement that markets experts still expect the economic situation to improve, but not as strongly as before.

“Global chip shortages in the automobile sector and the shortage of building materials in the construction sector have caused a significant reduction in profit expectations for these sectors, dampening economic expectations”.

Michael Saunders’ suggestion that interest rates could rise in the next year are interesting, but it’s worth remembering that he’s on the hawkish end of the monetary policy committee.

Interesting comments from the Bank of England’s Michael Saunders this morning, who said it might be right to think of rates going up in the next year or so. He indicated that the economy was already about the same size as it was before the pandemic, that inflation has been stronger than expected, and that the country does not need as much stimulus as previously.

However, it should be noted that Saunders is about the most hawkish on the nine-member MPC so does not speak for the central consensus. I don’t think it tells us much we don’t already know but it underscores the conundrum facing central banks today as to when to ease off the gas.

Saunders makes an important point in noting that continuing asset purchases when inflation is 4% might cause medium-term inflation expectations to drift higher, which could cause a more severe monetary policy response down the road. If central banks don’t get a grip on it now, they could be faced with bigger problems later – but they are all deeply paranoid about choking off recovery too soon.

The pound tried to rally against the US dollar after Saunders comments hit the wires, but “quickly reversed to hit its weakest since 2nd September” at just over $1.38, Wilson adds.