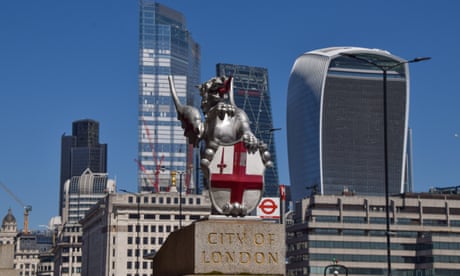 PensionBee has made a smooth debut on the London stock market today – in a stark contrast to Deliveroo’s stumble.

Shares in the pension consolidation business are up over 6% today at 179p, the first day of unconditional trading. That’s up from the float price of 165p, which valued PensionBee at £365m, showing that the City hasn’t lost its appetite for IPOs.

PensionBee’s target market are people with several small pensions, who are deterred by the hassle of putting them into a single pot.

It helps people track down their old plans and consolidate them, and has more than 81,000 customers who have moved pension assets to, or paid into, one of its investment plans.

Deliveroo, though, is trading near a record low today at 228p, having floated at 390p a month ago – despite doubling its orders during the lockdown.

It emerged last week that hedge fund Odey Asset Management had shorted its shares, as City investors were deterred from taking part in its IPO due to corporate governance worries, and potential legal challenges over the treatment of its riders.

Here’s Manuela Finger, partner at the Munich office of law firm Gowling WLG, on the supply chain bottlenecks in Germany (and beyond…):

“Supply chain snags can soon become supply chain crises if the right level of insight is not put in place to prevent potential blockages.

While political and regulatory issues are clearly at play here, this clearly highlights the need for forward thinking and scenario planning to help highlight the importance of backing up supply contracts and arrangements.”

A new report from Resolution Foundation today is warning that older workers have been hit hard by the pandemic.

The Covid-19 crisis has led to the biggest annual employment fall for workers over 50 since the 1980s, Resolution shows.

So while there’s rightly been a lot of focus on young people, who bore the brunt of job losses in the last year, older employees also need more support.

It can take longer for them to return to the labour force, often on lower wages, and with an impact on their retirement plans.

My colleague Amelia Hill has the details:

The Resolution Foundation has warned that older people who lost their jobs during the pandemic could receive worse support than younger people, leading to large numbers of over-50s falling out of the workforce for good.

In its report, A U-Shaped Crisis, supported by the Nuffield Foundation, the independent thinktank voiced concerns that Restart, the recently announced support scheme for the long-term unemployed, “carries the risk that older workers receive a lower quality of service than younger workers”.

Resolution have presented the report this morning – here are the key points.

Our economics editor, Larry Elliott, has a word of caution about the prospect of a strong UK recovery this year as the economy bounces back.

It is, of course, perfectly possible that this boom will be different from the others and that the economy will, in due course, settle down to a period of steady, sustainable growth. That, though, is based on a number of key assumptions.

The first is that the desire to spend will persist and is more than a brief spasm of activity that will fizzle out when the novelty wears off. Currently, this doesn’t look all that likely because many consumers have spent the past year paying off their debts and seem confident enough to splash the cash.

A second assumption is that rising bond yields are nothing to worry about. In the US, the country that really counts, the cost of borrowing for the government has been rising as the economy picks up speed. This can be seen either as a natural response to stronger growth or as a precursor of an inflation problem to come.

The third – most important – assumption is that vaccines will tame the coronavirus. Not sufficiently to claim total victory but enough so that something like normal life can be resumed. Economic activity is picking up fastest in advanced countries because they are vaccinating fastest. Even so, there was an air of unreality last week when news of Britain’s spending spree coincided with reports of record Covid-19 cases in India and hospitals running short of oxygen.

None of which is to say that another recession is inevitable or imminent. The consumer spending spree may well continue. Policy may be perfectly calibrated. The housing market may not be a bubble. Rich countries may ensure vaccines arrive in poor countries that badly need them. It would be wise to enjoy the good times while they last, that’s all.

Goldman Sachs has also predicted the UK economy will grow strongly this year, and even faster than the US.

In a note to clients, the Wall Street bank predicts UK GDP would grow by “a striking” 7.8% this year (even pacier than EY Item Club’s prediction of 6.8% growth today).

Goldman points to April’s PMI survey, which showed private sector growth at eight-year high this month as evidence that the economy is rebounding fast, along with the jump in retail sales in March.

The UK economy is rebounding sharply from the covid crisis. The April flash PMI was much stronger than expected in the UK, with the services PMI moving sharply further into expansionary territory.

Combined with other recent growth metrics—including a 5.4% jump in March retail sales—our Current Activity Indicator is now running at an annualised pace of 7.1% in April.

Given recent upward revisions to real GDP, our 2021 forecast is now at a striking 7.8% for 2021, above our expectations for the US and sharply above the Bloomberg consensus of 5.5%.

Reuters helpfully points out that Goldman had previously expected Britain’s economy would grow by 7.1% this year, while its forecast for U.S. growth in 2021 stands at 7.2%, helped by U.S. President Joe Biden’s huge fiscal stimulus programme.

Computer chips aren’t the only product in short supply.

Ifo economist Klaus Wohlrabe has told Reuters that a range of products are causing bottlenecks in Germany:

“There are bottlenecks with semiconductors, for example, but also with many other products. There is sand in the engine when it comes to procurement, across almost all industries.”

On Saturday, the Financial Times reported that Volkswagen has warned top managers to brace for a bigger production hit in the second quarter than the first because of the global chip shortage.

We are being told from the suppliers and within the Volkswagen Group that we need to face considerable challenges in the second quarter, probably more challenging than the first quarter.”

Andrew Kenningham at Capital Economics said the Ifo survey showed that Germany’s economy is treading water at the beginning of the second quarter:

IFO’s report also highlights how Germany’s factory sector is outperforming the services sector, although supply bottlenecks are a growing problem….

In manufacturing, the business climate rose to its highest value since May 2018. Companies reported greatly improved business. The demand situation is still very good. Capacity utilization rose considerably from 81.9 to 86.2 percent. This brings it above its long-run average of 83.5 percent for the first time in almost two years. However, optimism declined with regard to expectations. Fully 45 percent of companies reported bottlenecks in intermediate products – the highest value since 1991.

In the service sector, the business climate indicator fell somewhat following a steep rise in the previous month. Service providers were slightly less satisfied with their current situation. Recent signs of optimism have disappeared again. While the logistics industry is benefiting from the upswing in manufacturing, other industries are still suffering, in particular hospitality and tourism.

Econonomic optimism in Germany is being held back by the latest wave of Covid-19 infections, and the global shortages of key parts and components such as semiconductors.

The Ifo institute’s latest business climate index has risen slightly this month, to 96.8 from 96.6 in March.

That’s below forecasts of a rise to 97.8, with companies less optimistic about the economic outlook.

“Both the third wave of infections and bottlenecks in intermediate products are impeding Germany’s economic recovery,”

IFO says 45% of companies reported bottlenecks in intermediate products – the highest value since 1991.

But……Carsten Brzeski of ING says the German economy could stage a strong rebound in the second half of this year, as the general outlook has ‘clearly improved’:

The vaccination programme is finally getting moving and with the prospect of at least 50% of the adult population having had a first jab before the summer, a more substantial reopening of the economy should not be too far away.

New variants of the virus, however, as currently witnessed in India, could definitely spoil any reopening parties. Add to this potential spillovers from US fiscal stimulus, the implementation of the European Recovery Fund in the second half of the year, a rebound in the construction sector and the fact that the manufacturing sector still has not reached pre-crisis levels, and stronger Ifo readings in the months ahead look highly likely.

In our view, the prospects for the German economy to stage a strong rebound in the second half of the year remain good.

IMI, the UK engineering firm, has jumped 7% after raising its profit guidance and announcing a £200m share buyback plan.

Holiday firm TUI (+4%) and budget airline easyJet (+3.4%), and property firm Hammerson (+3.5%), are among the risers as investors favour ‘value stocks’ which will benefit from the reopening of the economy.

Copper prices have hit their highest level since 2011 today, lifted by recovery hopes, supply concerns and a weaker US dollar.

Last week, mining unions in Chile (a top copper producer) threatened to take protest action if the government does not drop a bid to block Chileans from drawing down more of their pensions savings early.