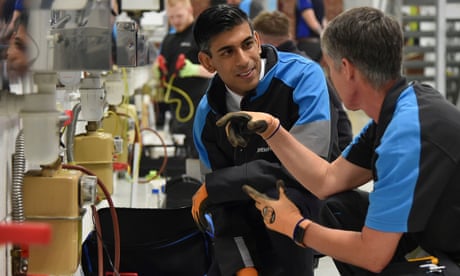 The biggest state intervention in the UK’s labour market in peacetime comes to an end this week when the government finally winds up its furlough support.

Barring an unlikely last-minute change of heart, a wage subsidy that has been in place for 18 months and has cost £70bn will no longer be open to struggling firms.

Rishi Sunak, who announced the furlough in March 2020, thinks the money has been well spent but the economy is now far enough down the road to recovery to cope without the government assisting with wage bills.

Most economists agree with the first half of the chancellor’s assessment, seeing the furlough as good value given the catastrophic impact on firms of the Covid-19 pandemic. At its peak in May 2020, almost 9 million jobs were being supported by the scheme, which covered 80% of wages up to a monthly limit of £2,500.

Where there is less unanimity is on what should happen next. The chancellor believes the labour market now needs more customised support that will match workers still on furlough with more than 1 million job vacancies. He will announce plans for that in next month’s budget.

The TUC – which helped develop the furlough – says the government risks throwing away all its good work, and has called for the furlough to be used as the basis for a permanent short-time working programme of the sort seen in countries such as Germany.

The Bank of England is also growing more nervous about what will happen to more than 1 million still-furloughed workers once employers are responsible for paying their wages in full. At its September meeting, its monetary policy committee (MPC) said the number of full and part-time furloughed jobs had continued to decline but at a “materially lesser degree” than it had estimated in its three-monthly update on the economy in August.

The Bank said the slower pace of people coming off the furlough coupled with record job vacancies meant the labour market was hard to read: “Key questions include how the economy will adjust to the closure of the furlough scheme at the end of September; the extent, impact and duration of any change in unemployment; as well as the degree and persistence of any difficulties in matching available jobs with workers.”

Samuel Tombs, UK economist at Pantheon Macroeconomics, said he doubted whether the economy would grow fast enough next month for businesses to fully re-employ all the 1.6 million staff who were still furloughed at the end of July.

“While the unemployment rate probably will rise only to about 5% in the fourth quarter of 2021, from 4.5% in the third quarter, we expect underemployment to rise sharply, as people return to their former employers, but work fewer hours than they would like. As in the early 2010s, this reservoir of ‘hidden’ labour market slack should exert considerable downward pressure on wages.”

The Bank will be closely monitoring the impact of ending the scheme, with the MPC noting there was “high option value” in seeing how the labour market coped before raising interest rates.

One thing is certain. In the event that rising infection rates necessitate another lockdown of the economy, Sunak will be under strong pressure to bring furlough back. A precedent has been set.