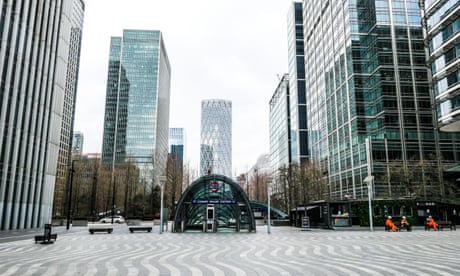 The pandemic has also left UK households with a huge pot of savings which could drive the recovery this year.

The Office for National Satistics reports that the total currency and deposits held by UK households surged by £186.1bn in 2020.

That was due to a record increase in savings, as people were unable to spend in the shops during lockdown, with government support protecting the wages of furloughed emplyees and some self-employed workers, it explains.

As this chart shows, consumption slumped much faster than income during the pandemic:

Household saving (classed as ‘net lending’) jumped, just as government borrowing also swelled to cover the cost of the pandemic:

Outgoing Bank of England chief economist Andy Haldane has argued that these savings mean the economy is poised like a ‘coiled spring’ to rebound rapidly this year.

Credit rating agency Moody’s has estimated that consumers around the world have stockpiled an extra $5.4tn of savings since the coronavirus pandemic began, the Financial Times reports today.

“The combination of an unleashing of significant pent-up demand and overflowing excess saving will drive a surge in consumer spending across the globe as countries approach herd immunity and open up.”

But, of course, not every family is sitting on a pot of savings, ready to splash the cash.

The most dramatic action in the market so far today is in football club shares.

Juventus shares have soared over 10% so far today, after they and 11 other ‘founder clubs’ launched a breakaway European Super League backed by JP Morgan that has enraged fans and been widely condemned.

Manchester United’s shares are set to jump when Wall Street opens (currently up over 7% in pre-market).

The financial incentive for the clubs is plain to see, with a multi-billion dollar package at the heart of the scheme, albeit it would forever break the integrity of the club game. The sort of additional revenues the ESL will deliver would need to be offset by a potential material decline or total loss of existing earnings from media deals through national leagues and UEFA.

Our Football liveblog has all the latest reaction:

A Bank of England digital currency for the UK has moved a step closer after the chancellor Rishi Sunak announced a top-level taskforce to explore the benefits and risks of the idea.

Sunak said a joint Treasury-Bank of England taskforce was being set up as part of a range of measures designed to boost the City following Britain’s departure from the EU.

Sunak said he wanted the City to be at the forefront of innovation and to take advantage of regulatory freedom after Brexit. The Treasury said two new forums would be established to engage technical experts and key stakeholders including financial institutions, retailers, businesses, civil society groups and consumers.

A “David versus Goliath” legal action gets under way at the high court on Monday as hospitality bosses try to force the UK government to bring forward the reopening date for pubs and restaurants indoors.

A judge will this week consider evidence in the case brought by Sacha Lord, the night-time economy adviser for Greater Manchester and a co-founder of Parklife festival, and Hugh Osmond, the founder of Punch Taverns and a former boss at Pizza Express. The case has been expedited.

Pubs and restaurants in England were allowed to welcome customers again from 12 April after a national lockdown, but only in outdoor areas. Non-essential shops were allowed to reopen on the same day.

The government has set out a timetable aiming to allow hospitality customers indoors in England no earlier than 17 May, although still with restrictions. Other nations of the UK have varying timetables for reopening….

Changing working patterns due to the pandemic are also helping to push UK property prices higher.

The average UK asking price jumped almost £7,000 this month, Rightmove reports, as some families try to find properties with more space for homeworking away from the office.

‘A combination of lowest-ever interest rates, high loan-to-value mortgages, stamp duty relief and government stimulus, along with a year of on-and-off lockdown, has pushed demand for property to record levels.

If now isn’t the time to buy, then when is? Will we have such an appealing time to buy again, who knows? But with so many positive reasons to buy and people simply needing more space, this trend is set to continue in the short term at least.

In the City, the FTSE 100 index has opened higher.

Supermarket chain Sainsbury (+1.3%) is also in the risers, along with software developer Aveva (1.4%) and internet security firm Avast (1.2%), and engineering firm Renishaw (+1.5%).

The Europe-wide Stoxx 600 gained another 0.1%, with carmakers among the risers.

Automakers were the top gainers, up 0.7%, followed by miners and travel stocks.

Another survey, by Deloitte, has also found that almost one in four UK workers hope never to set foot in the office again.

Thats suggests that 7.5m people keen to permanently work from home every day of the week, even once the pandemic is over. Some say home working is more efficient, or relaxing, while others enjoy the break from commuting (avoiding cost, stress and lost time).

But even more (28%) are desperate to escape home working — and would much rather be back in the office, rather than toiling at the kitchen table, bedroom (or even garden office).

The Telegraph has the details:

It underlines the stark split in the nation’s workforce, divided by their experiences of lockdown and their hopes for the future.

Just over two-fifths (42pc) want a balance between the extremes, with at least two days at home each week.

Will Gosling of Deloitte said: “Those coming into the workforce, in their early careers, are sponges. They can learn technical stuff anywhere, but what gives them the edge and what makes work interesting and exciting is the stuff you cannot learn in a textbook or an online course.

The split between workers keen to return to the office, and those reluctant, means that employers need to be flexible.

Canada Life’s survey of current home-workers* found that 70% of those who plan on returning to the office are happy to adapt their working practices.

[* the survey covered 592 UK adults that are full time workers who now work from home because of the pandemic, and took place back in January during the current lockdown]

Hopes of a return to economic normality have lifted stock markets to record levels… but some workers are concerned about returning to the office after more than a year of working from home.

MSCI’s broadest index of Asia-Pacific shares outside Japan hit its highest level since March 18 this morning, taking its gains in 2021 to over 5%.

European and US stocks also hit record highs last week, with Britain’s FTSE 100 at its highest level since the pandemic began. Strong economic data from the US, in particularly, have created a very bullish feeling in the markets.

As Kyle Rodda of IG puts it:

Global stocks ran higher into the end of the week to clock-up fresh record highs on Friday. Market sentiment is undoubtedly bullish right now, with the VIX [volatility index] hitting new post-pandemic lows, and investors surveys and indicators like the put-call ratio and AAII investor sentiment reading indicating a market increasingly willing to load-up on risk.

At the moment, it seems like markets are in that goldilocks zone: policy is accommodative and economic fundamentals improving – but not so much to increase expectations of an unsustainable recovery, inflationary pressures and tighter monetary policy.

Covid-19 vaccination programme have also lifted economic optimism. But after more than a year of lockdowns, some workers are hesitant about returning to the office, though.

A new report from financial services firm Canada Life this morning has found that “Fear of the Office” has emerged, particularly among those who have suffered from Covid-19.

Amongst Brits that now work from home, this trend is more prevalent among those who have previously tested positive for Covid-19, with only 34% planning on returning to the office. This compares to 69% of those who haven’t suffered from the virus.

The data highlights that despite the potential for continued immunity, those who have experienced Covid-19 are more reluctant to return to work face-to-face.

Dan Crook, Protection Sales Director, Canada Life, explains that employers are likely to have three cohorts of employees: one group that cannot wait to return to the office, another that would happily work from home forever and a third that would like a hybrid-model of both.

Ultimately, it’s going to be very hard for employers to please everyone. In reality, the return to the office should be a phased approach which is sensitive to the needs of employees.

Plans should be flexible as they are likely to evolve over time.”