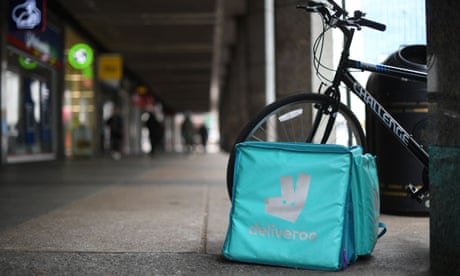 Over in the eurozone, inflation has jumped to its highest level since the pandemic began.

Consumer prices rose by 1.3% per year in March, data provider Eurostat estimates, back towards the European Central Bank’s annual inflation target of just below 2%.

The increase was partly due to a jump in energy prices, as the rise in crude prices pushes up heating and travel costs.

The financial markets have been obsessed with inflationary pressures recently, as it could force central bankers to end their stimulus packages sooner than planned.

But… Charles Hepworth, investment director at GAM Investments, predicts this jump in the cost of living will fade in a few months.

Price pressures came through in fuel costs which have seen a 200% increase in the oil price against this time last year when prices collapsed as the pandemic started. This base effect in inflation popping in the short term is as expected but it is unlikely to persist beyond a few months in our view.

The ECB has stressed that they will continue to look through the modest inflation increases in the short term, viewing it a as temporary aberration rather than a medium term move to a higher inflation threat level. Equities and bonds have been reacting slightly manically over the last few months on inflation expectations moving sharply higher and as long as these prints remain contained, it will help limit their collective neuroses.

Pub chain Fuller, Smith & Turner has also given an insight into the damage caused by Covid-19.

Fullers revealed today that revenues fell 80% during the past year, meaning it burned through up to £5m of cash each month that its pubs were fully locked down.

Putting Deliveroo to one side… specialist insurance market Lloyd’s warned this morning that it faces a £6bn hit from pandemic-related claims – a reminder of the economic cost of Covid-19.

Lloyd’s reported pre-tax net losses of £900m for 2020, blaming natural catastrophe claims and Brexit for hitting earnings alongside the pandemic. In 2019 it made a pre-tax profit of £2.5bn.

The expected £6.2bn Covid-19 payouts are significantly higher than the £5bn it had forecast in September, before second waves of the pandemic had fully hit developed economies.

Lloyd’s is hoping for a much-reduced level of claims during 2021, although the week-long blockage of the Suez canal trade route by the grounded Ever Given ship is likely to cost at least £100m in payouts.

John Neal, Lloyd’s chief executive, said it had faced a “triple threat” from the pandemic alongside extra “cost and complexity” from Brexit and the fifth-largest year for natural catastrophe payouts, excluding the virus.

Here’s our full story on Deliveroo’s float, by Rob Davies:

He cited the need to improve the treatment of workers in the gig economy.

The Press Association has the details.

“No, I wouldn’t buy shares in Deliveroo. I accept the argument that we have got to have economic growth coming out of this pandemic, that is an absolute priority, but what we can’t do is go back to the broken system that we had before.

“Insecure work, not proper pay, low standards. We need to have the ambition to go forward to an economy which is long term, high standards, high wage, with proper protection for those within the workforce.

“That has to be the ambition, it’s a fork in the road really as we come out of this pandemic, very clearly we’re not going back to that way of doing economics and running the economy. We’ve got to go forward to something which is long term, better and more secure.”

“What I think there needs to be is a framework that makes it very clear that our economy of the future has to be one which is about security at work, fairness at work, longer-term investment, skills.

“That is obviously better and fairer for those within either the gig economy or any part of our economy.

“It actually makes business sense, I think, good businesses recognise that the arrangements we had going into the pandemic were part of the problem and we need to have an ambition to do better than that as we come out.”

Although its shares have taken a plunge (in conditional trading), Deliveroo has still raised £1.5bn through its initial public offering.

Of that money, £1bn is going to the company and £500m to existing investors.

Founder Will Shu says that the float will help the company grow and invest, declaring this morning:

“I am very proud that Deliveroo is going public in London – our home. As we reach this milestone I want to thank everyone who has helped to build Deliveroo into the company it is today – in particular our restaurants and grocers, riders and customers.

In this next phase of our journey as a public company we will continue to invest in the innovations that help restaurants and grocers to grow their businesses, to bring customers more choice than ever before, and to provide riders with more work. Our aim is to build the definitive online food company and we’re very excited about the future ahead.”

Deliveroo certainly has ambitions. It argues that there are 21 meal occasions in a week – breakfast, lunch, and dinner each day – which could be served by a delivery.

Right now, less than one of those 21 transactions takes place online. We are working to change that.

Lee Wild, head of equity strategy at interactive investor, sums up the situation:

“It’s been a disastrous stock market debut for Deliveroo after a cool reaction from the City.

“After months of speculation and drama, shares in Deliveroo – ticker ROO – began trading on the London Stock Exchange at 8am on Wednesday. But it wasn’t the start the takeaway food delivery firm had wanted, with the price plunging by 30% in quick time.

“The run-up to Deliveroo’s stock market debut has been marred by criticism of the company’s treatment of delivery riders, and by doubts among many top fund managers who chose not to invest in the flotation.

“It announced this morning that existing shareholders had sold £500m of Deliveroo stock at 390p a share, with new shareholders subscribing for at least £1bn of shares. This valued the company at £7.59 billion.

“That looks like great business for the sellers as Deliveroo shares began falling as soon as the market opened. They quickly hit a low of 271p, over 30% below the offer price, before recovering slightly to around the 300p level.

“IPOs typically rise in value when they begin trading publicly, which has attracted criticism from retail investors and investment platforms, including interactive investor. But preparations for this float have not been ideal, and there were several clear warning signs that all was not well.

“Firstly, the company doesn’t make a profit, even though the pandemic provided the biggest tailwind it could hope for. That benefit will fade as lockdowns end and diners return to pubs and restaurants over the summer. Remember, too, that Deliveroo had to be bailed out by Amazon last year, and it continues to operate in a highly competitive market.

“Most recently, several major City investors, including Aviva and Aberdeen Standard, opted out of the hotly anticipated IPO citing ESG concerns related to the company’s treatment of its employees. They’re also turned off by founder and chief executive Will Shu who still has over 50% of shareholder voting rights.

“It is also worth remembering that Deliveroo can cancel the IPO at any time until 7 April. That’s because the shares are currently trading conditionally – what’s called a ‘when issued’ basis. It is highly unlikely this will happen, but it’s worth pointing out.”

One technical point. Deliveroo is currently trading on a conditional basis on the London Stock Exchange.

Unconditional dealing is due to begin on 7th April, when the company is officially listed, which is when conditional deals are settled. So the float could theoretically be cancelled before then, as Sam Shead of CNBC points out. But that would be most unusual.

After more than three hours of conditional trading, Deliveroo’s shares are hovering around the 300p mark.

That’s a roughly 23% decline on its initial public offering price of 390p, but up from the 30% plunge early in the session.

By my rough calculation, that values Deliveroo around £5.85bn, down from the £7.6bn market capitalisation set in the IPO.

A poor start to the biggest float in London in almost a decade.

The sight of investors shunning Deliveroo should force the company to rethink how it treats its workers, says UK unions chief Frances O’Grady.

“Deliveroo has no excuse for the way it treats its workers.

“It’s a damning indictment of the company’s exploitative business model that so many major funds have publicly shunned this float.

“Instead of setting aside hundreds of millions of pounds to fight legal battles on workers’ rights, Deliveroo should just treat its riders fairly and pay them properly.

“And if the company thinks it can just cash in on this listing without improving working conditions, it should think again. Deliveroo will face greater scrutiny as a publicly listed company, and responsibilities to stakeholders. It needs to get start treating its workers decently.”

Phil Webster, a portfolio manager at BMO, which is one of the largest banks in North America, pointed to the treatment of Deliveroo couriers.

Webster said labour issues represented a “ticking bomb on the side” for Deliveroo, which contributed to making it “uninvestable”.

The nicknames are pouring in.

“Deliveroo has gone from hero to zero as the much-hyped stock market debut falls flat on its face. It had better get used to the nickname ‘Flopperoo’.

Mould agrees that the concerns of several major investors over Deliveroo’s working conditions was a blow to the float.

“Initially there was a lot of fanfare about the Amazon-backed company making its shares available to the public, including the ability for customers to buy stock in the IPO offer.

“Sadly, the narrative took a turn for the worst when multiple fund managers came out and said they wouldn’t back the business due to concerns about working practices.

Also… the appetite for fast-growing, but currently unprofitable, tech companies has fallen in recent weeks, as investors have anticipated an end to the pandemic, Mould adds:

“There are multiple ways of looking at the business. Bulls will say the pandemic has made online food ordering part of everyday life and this trend will remain intact once life returns to normal. Bears will say it is a highly competitive space, Deliveroo doesn’t make any money and that takeaway ordering volumes will ease once the pandemic ends.

“Fast growth jam tomorrow shares are no longer in fashion as investors now prefer lowly-valued stocks that offer jam today. That meant Deliveroo was already fighting a headwind as soon as it hit the stock market.”