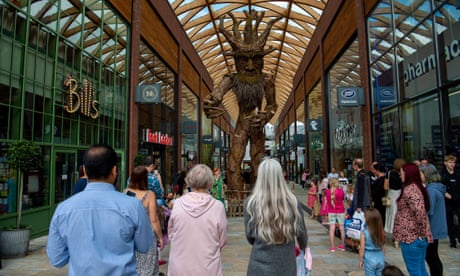 The drop in UK retail sales last month was down to three factors, says Philip Shaw of Investec:

As such, he thinks sales patterns are shifting towards normalisation, rather than the recovery stalling….

The fact that the vast majority of the company insolvency procedures for August 2021 are creditor voluntary liquidations (ones which have been undertaken voluntarily by the directors) is a healthy sign. It indicates that those running insolvent companies are taking a serious, sensible and proactive stance in addressing not only their legal obligations but their responsibility to creditors.

However, I would query, in light of the withdrawal of a number of COVID/19 related protections, whether we’ve reached the peak of company insolvencies.

Speaking of retail….Next has struck a deal with Gap to run its business in the UK and Ireland, months after the US chain confirmed it was shutting all its high street stores in those countries.

Under the terms of the agreement, Next will operate Gap’s online shopping business, host branded Gap concessions in selected retail locations, and offer “extensive” click-and-collect options for online shoppers. Next has about 500 retail stores in the UK and Ireland.

The franchise deal will operate as a joint venture, with Next controlling a 51% stake, and shoppers will be able to buy Gap clothing via Next from the beginning of 2022.

The agreement allows the US retailer to maintain a presence on British high streets after it announced the closure of 81 stores in the UK and Ireland in June. The closure programme will ultimately result in the loss of about 1,000 jobs, with the last Gap stores shutting at the end of this month.

The number of companies in England and Wales falling into insolvency has hit its highest level since the first pandemic lockdown.

In August 2021 there were 1,348 registered company insolvencies, the highest since the first UK lockdown in March 2020, new figures from The Insolvency Service show.

That’s up from 1,094 in July, suggesting that some companies are failing despite the easing of Covid-19 restrictions earlier this year.

It include 1,256 Creditors’ Voluntary Liquidations (where firms proactively wind themselves up) which is the highest level seen in the series since January 2019. There were just 35 compulsory liquidations.

There were also 614 bankruptcies, the lowest in the series which goes back to January 2019.

While CVL numbers have now returned to pre-pandemic levels, numbers for other insolvency procedures, such as compulsory liquidations for companies and bankruptcies for individuals, remain lower.

That’s party due to government support, they add, such as temporary restrictions on the use of statutory demands and certain winding-up petitions, and financial support for companies and individuals.

But, restrictions imposed during the coronavirus pandemic preventing businesses serving winding-up petitions against debtors will ease from the end of September, the UK government said last week.

“The insolvency figures published today highlight how much tougher the climate is for businesses and individuals than this time last year, and the toll the pandemic has taken on business and personal finances over the last 12 months.

“The increase in corporate insolvencies was driven by a rise in Creditors’ Voluntary Liquidations (CVLs). Numbers for this process were 115% higher than this time last year, and 30% higher than in 2019, which suggests that despite the opening up of the economy, there are a number of company directors who are opting to close their businesses after a year and a half of trading in a pandemic.

“This comes despite the fact that August was one of the better months for businesses since the start of the pandemic. The lifting of the final restrictions and the continued impact of the vaccine rollout means that more people are working, shopping and spending, and that looks set to continue as we enter the autumn.

“However, with the furlough scheme closing at the end of this month, company directors need to be aware of the signs of business distress and seek advice if any of them appear.

“It is encouraging to see that the vast majority of the company insolvency procedures for August 2021 (93%) are Creditor Voluntary Liquidations – i.e. ones which have been undertaken voluntarily by the directors.

This shows that most directors of an insolvent company are being pro-active in dealing with their company’s financial problems with a CVL, and thereby addressing their legal obligations and responsibilities to their creditors. while those who are being passive and just waiting for their company to be forced into Compulsory Liquidation make up only a small proportion of the monthly company insolvencies (3%).

The drop in UK retail sales last month highlights the damage that supply chain problems and staffing shortage are causing to small companies.

“Small firms trying to recover from the pandemic are facing a barrage of hits to this which is now very visible as these latest retail figures show.

“Supply chain problems are hitting hard alongside spiralling employment costs and staff shortages, while the consumer-led recovery could be losing steam.

“News that the government’s regressive jobs tax will place 50,000 people out of work could not come at a worse time. Retail businesses are nervous about their peak Christmas season, with an opaque winter covid plan likely to see trade restrictions installed at just a week’s notice. It feels to many like a sword of Damocles with a difficult winter ahead.

“Exporters, who are among some of the most innovative small firms, need more support, with delays at the border and soaring costs, or risk hampering their efforts to recover.

“Measures such as uprating the Employment allowance to support firms struggling with recruitment costs would help to free up cashflow to spur recovery of local communities, and promote hiring as furlough ends.”

“Small firms are the backbone of our economy, if they continue to suffer, then the rest of the country suffers.”

Europe’s early rally has fizzled out, as investors note that Wall Street is on track for a lower open.

Shares in travel and aviation businesses including the British Airways owner, IAG, Ryanair and the aero engine maker Rolls-Royce received a boost from news that the UK government is planning to simplify England’s rules for international travel.

Investors were buoyed up by the changes – which could include removing dozens of destinations from the 62-country “red list”, the highest alert for international travel requiring 11 nights’ hotel quarantine on return – which are expected to be officially announced by ministers on Friday.

Ministers are also considering removing the amber list category of countries entirely, meaning there would be a clearer distinction between “go” and “no-go” destinations….

The British’s public inflation expectations rose last month — as people respond to signs of rising prices in the shops.

The latest Bank of England quarterly survey shows that inflation expectations for the year ahead rose to 2.7% in August, from 2.4% in May.

Longer-term inflation expectations rose to 3.0% from 2.7% in May, which is the highest since February 2020, just before the pandemic hit the UK.

UK consumer price inflation jumped to 3.2% in August, the highest rate since March 2012, and a record jump from June’s 2%.

The Bank’s survey also found that people believe that the economy would end up weaker, rather than stronger, if prices started to rise faster, by a margin of 46% to 13%.

Asked what would be ‘best for the economy’ – higher interest rates, lower rates or no change – 25% thought rates should ‘go up’, up from 23% in May.

Fewer people think the Bank of England is ‘doing its job to set interest rates to control inflation’. The net satisfaction balance – the proportion satisfied minus the proportion dissatisfied – dropped to +18%, from +24% in May 2021 and +25% in February 2021.

It’s official: inflation across the eurozone has hit its highest level in a decade.

Consumer prices jumped by 3% in the year to August, up from 2.2% in July. That’s the highest rate since late 2011, and sharply over the European Central Bank’s 2% target.

Statistics body Eurostat’s final data, which confirms its ‘flash’ estimate, shows that energy costs are continuing to drive up the cost of living.

Energy prices saw the biggest surge, up 15.4% over the last year, while unprocessed food prices are up 3% per year. Industrial goods inflation jumped to 2.6%.

Across the region, Estonia, Lithuania and Poland all saw the highest inflation rates, at 5% per year.

The ECB has argued that the jump in inflation is temporary, due to the pandemic. It predicted last week that inflation will fall back over the next couple of years, away from its target.

But last night, the Financial Times reported that the ECB expects to hit its 2% inflation target by 2025, according to unpublished internal models that suggest it is on course to raise interest rates in just over two years.

This would be at least a year earlier than most economists expect the ECB to raise its deposit rate from a record low of minus 0.5 %, the FT says.

According to the FT, ECB chief economist Philip Lane told economists at German banks that its “medium-term reference scenario” (usually unpublished), shows inflation rebounding to 2 per cent soon after the end of its three-year forecast period.

The ECB has disputed the story, calling it inaccurate, and insisting:

“Mr Lane didn’t say in any conversation with analysts that the euro area will reach 2 per cent inflation soon after the end of the ECB’s projection horizon.”

Retail sales in Great Britain fell unexpectedly in August amid severe supply chain disruption and as consumers switched more of their spending from supermarkets to pubs and restaurants after the easing of pandemic restrictions.

The Office for National Statistics said retail sales dropped by 0.9% in August after a steeper decline of 2.8% in July. While spending remains above pre-pandemic levels, City economists had forecast a rise of 0.5%.

According to the latest snapshot, sales of food dipped by 1.2% on the month after the easing of hospitality restrictions had an impact, with people raising their spending on social activities such as eating and drinking in restaurants, pubs and bars.

However, sales fell across a broad range of other categories, including a sharp fall in sales at department stores as disruption to supply chains weighed on retailers.

Britain’s biggest retailers have warned that stock levels are at their lowest since the 1980s, with the economy coming under growing pressure from shortages of workers and goods because of the fallout from Covid-19 and Brexit…..