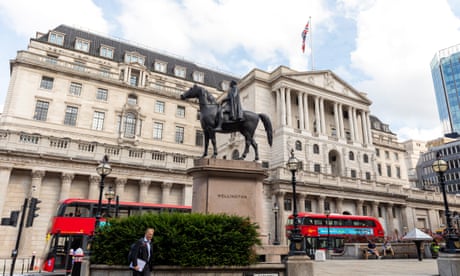 The recovery will be bumpy, says Bailey. The Bank takes rising inflation very seriously, he adds.

There are good reasons to believe the rise in inflation will be temporary, but the MPC will not hesitate to act if that judgement changes, says Bailey in conclusion.

At some point the stance of UK monetary policy may need to tighten to achieve its 2% inflation target, Bailey says.

The committee’s preference is to use bank rate to try to affect the economy rather than other tools like quantitative easing (QE), he says.

The MPC intends to reduce the stock of assets when bank rate rises to 0.5%, he says.

That is lower than the previous threshold of 1.5%. That reflects the MPC’s judgement that setting a negative bank rate is now part of the Bank of England’s toolkit, he says.

There were different views as to whether the conditions for tightening policy had been met, Bailey says.

The committee will not put undue weight on capacity pressures that are frictional and likely to be temporary in nature, he says.

The committee will be monitoring unemployment, wider levels of slack, and wage pressures, he says.

“Some modest tightening of monetary policy over the forecast period is likely to be necessary,” Bailey says.

Our view is that the pressures will reduce, Bailey says.

Bailey says the challenge of stopping unemployment has been replaced with labour market pressures.

Pay growth appears to have returned to near pre-Covid levels.

The most substantial news since the Bank’s May forecasts is the rise in inflation.

Bank of England governor Andrew Bailey is speaking now at the press conference.

More updates as he speaks.

There was a clear signal from the Bank of England that is will be thinking of how to tighten policy in the coming months. But that does not necessarily mean a move is imminent.

We still think it’s more likely that the MPC continues to sit tight until the middle of 2023 before tightening policy.

Yet the Bank’s statement was more hawkish than expected, she said.

As expected, the Bank used its economic forecasts to convey a more upbeat message about the economic outlook. Indeed, while the economy is still expected to regain its Q4 2019 pre-pandemic peak in Q4, the Bank now thinks that instead of peaking at 5.4% in Q3, the peak in the unemployment rate has already happened.

Most importantly, after stressing since the start of the pandemic that it wasn’t even thinking about tightening policy, the committee today said that “some modest tightening of monetary policy over the forecast period was likely to be necessary to be consistent with meeting the inflation target sustainably in the medium term”. In fact, some members of the committee already think that the “conditions of the existing guidance had been met fully”.

A brief interlude as we await the Bank of England press conference: casino consolidation rumours have sparked investor interest.

Ever since Las Vegas-based MGM Resorts walked away from a bid for Ladbrokes owner Entain in January, the question hasn’t been so much if it will return but when.

A six-month ban on an improved bid expired in mid July and expectation is building that an improved offer will come soon.

Back in January, Entain rebuffed an £8bn approach. Its stock market value has climbed steadily since then, to around £11.4bn this week, indicating the board were right to laugh off the US predator’s offer.

Shares in Entain are up 2% today and 11% since 20 July. Much of the recent surge can be put down to expectations that MGM Resorts is putting together a new offer at something more like what Entain shareholders will be looking for.

With the US sports betting market opening up rapidly – and promising even greater returns than first thought – a fresh tilt at Entain, at a significantly improved price, looks like a racing certainty.

The one dissenter at the Bank of England’s meeting who wanted earlier action to tighten policy was Michael Saunders.

He voted to reduce the target for the stock of UK government bond purchases from £875bn to £830bn.

(And a correction to an earlier post: 7-2 was not a possible result because new recruit Catherine Mann will not join the committee until next month. That meant there were only eight members at this week’s meeting.)

The pound is basically unchanged against the dollar after the Bank of England’s statement.

It’s a tricky one for foreign exchange analysts to work out. On the one hand there are some signs of tighter monetary policy coming. On the other hand the outlook for future interest rate rises is lower.

Another important clue in the MPC’s monetary policy report: it will cut back the stock of its quantitative easing bond purchases only when bank rate has risen to 0.5% – up from 0.1% now.

At first it would do that by not reinvesting the proceeds from maturing bonds, but it could also consider “actively selling” some of those bonds. However, don’t hold your breath just yet: it won’t sell those bonds until bank rate is at least 1%.

The Bank of England has shifted its projections for growth this year and next, as well as increasing its inflation forecast.

Its inflation forecast was raised signficantly. Consumer price index (CPI) inflation will rise to above 4% in the fourth quarter of 2021, double its 2% target. By the third quarter of 2022 the Bank expects inflation of 3.3% – 1.1 percentage points higher than it thought in May.

The Bank of England’s monetary policy committee has said that “modest tightening” of policy may be necessary if the economy continues to improve.

The committee judges that, should the economy evolve broadly in line with the central projections in the August Monetary Policy Report, some modest tightening of monetary policy over the forecast period is likely to be necessary to be consistent with meeting the inflation target sustainably in the medium term.