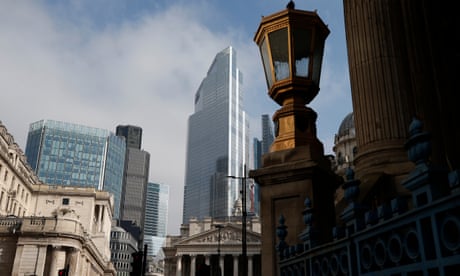 The Bank also flags up that the UK economy shrank by less than expected in January, but is still around 10% smaller than before the pandemic began.

UK GDP fell by 2.9% in January. This was less weak than expected, due mainly to developments in public sector output, but still leaves GDP around 10% below its 2019 Q4 level.

The news in recent plans for the easing of restrictions on activity may be consistent with a slightly stronger outlook for consumption growth in 2021 Q2 than was anticipated in the February Report, although it is less clear that this represents news to the MPC’s medium-term forecast.

[The ONS reported last week that Health had a large contribution to growth in January 2021, increasing by 8.7%, mainly through coronavirus testing and tracing and vaccine schemes across the UK]

BoE: Covid-19 restrictions could be lifted more rapidly than assumed in February

It’s possible that the restrictions on the UK economy could be lifted ‘somewhat more rapidly’ than forecast back in early February, the Bank of England states:

The rates of Covid infections and hospitalisations have fallen markedly across the United Kingdom and the vaccination programme is proceeding at a rapid pace. Plans for the easing of restrictions on activity have been announced and envisage that restrictions could be lifted somewhat more rapidly than was assumed in the February Report.

Budget 2021, published in March, contained a number of significant new policy announcements, including the extension of the Coronavirus Job Retention Scheme and other measures to support the economy in the near term which had not been reflected in the February Report.

The Bank of England has voted unanimously to leave UK interest rates unchanged at 0.1%, as expected.

The Bank’s monetary policy committee has also left its £895bn quantitative easing programme unchanged, meaning it will continue to buy up to £875bn of UK government bonds (and hold £20bn of corporate debt).

Here comes the Bank of England’s decision, in a busy couple of days for central bank news…

The UK government has cut grants for electric car buyers, to the horror of the automotive industry as it tries to rapidly shift away from fossil fuels.

The maximum grant for electric cars has been reduced to £2,500 with immediate effect on Thursday, from £3,000. The government has also lowered the price cap for cars eligible for the subsidy from £50,000 to £35,000.

The cut is likely to be controversial, only a fortnight after the chancellor, Rishi Sunak, extended a generous implicit subsidy for petrol and diesel car drivers by freezing fuel duty.

Online job adverts in the UK have hit their highest level since the first lockdown a year ago.

It’s a sign that the employment market is picking up, as firms plan for the end of the Covid-19 lockdown restrictions.

The Office for National Statistics reports that on 12 March 2021, the volume of online job adverts listed on Adzuna was at 93% of its average level in February 2020.

That’s the highest level observed since 12 March 2020, driven by rises across all UK countries and regions, the ONS says.

There was a big surge in orders for “transport, logistics and warehouse” roles, the ONS says:

Excluding the “unknown” category, compared with 5 March 2021 the volume of online job adverts increased in all Adzuna categories except “legal”, which fell by 8 percentage points. On 12 March 2021 “legal” job adverts on Adzuna stood at 72% of their average level in February 2020.

Here’s more from the ONS’s weekly report on the impact of the pandemic:

Turkey’s central bank hiked its policy rate by a more than expected 200 basis points to 19% on Thursday to address a sliding lira and rising prices, in what was seen as a credibility test given President Tayyip Erdogan’s opposition to tight policy.

In a Reuters poll, almost all of the 21 economists expected a 100-point rate hike. The lira responded with a 2.0% jump against the dollar.

The key one-week repo rate had stood at 17% since December after aggressive monetary tightening last year. It is the highest of any advanced economy and back to levels last touched in mid-2019.

The latest eurozone trade data confirm that there was a plunge in UK imports and exports with Europe in January, after the Brexit withdrawal agreement ended, and as the pandemic continued to hit trade.

Eurostat reports that EU exports to the UK fell by 27.4% year-on-year, while imports from the UK tumbled by 59.5% compared with January 2020.

That’s worse than other major trading partners. But there was a general slump in trade, with euro area exports falling 11.4% compared with January 2020, and imports dropping 14.1% year-on-year.

Eurostat cautions that methodological issues around how UK trade is calculated post-Brexit means that the data isn’t “fully comparable” with previous data, or with other non-EU trading partners.

So bearing that in mind, here are the details:

Earlier this month the UK Office for National Statistics reported that the UK suffered its biggest monthly fall in goods imports and exports since records began in January 1997.

Carole Bayer Sager, the writer of hits including A Groovy Kind of Love and That’s What Friends Are For, has sold the rights to her extensive back catalogue of songs to London-listed music royalties investment firm Hipgnosis.

In a 55-year career, she has written songs that have become worldwide hits for artists including Phil Collins, with 1988’s A Groovy Kind Of Love, and Rod Stewart’s That’s What Friends Are For, later remade by Elton John, Stevie Wonder, Dionne Warwick and Gladys Knight.

Other collaborators include Carly Simon, who recorded Nobody Does it Better for the 1977 James Bond film The Spy Who Loved Me, and Dolly Parton, with Heartbreaker and You’re The Only One.

Ocado, the online grocer, has reported a 40% surge in sales in the last three months and said it would benefit from the “dramatic and permanent shift” towards online shopping over the past year.

The average order cost £147, which Ocado put down to shoppers spending more on home grocery deliveries over the festive period — when many had to change their Christmas plans at short notice after stricter coronavirus lockdown measures were introduced in England — and during the latest national lockdown that followed in the New Year.

Shares in Ocado are down 2.5% this morning to £20.30, and have dropped sharply over the last few weeks amid the tech selloff (they were £28 in early February).

“Pleasingly for Ocado, the switch from Waitrose to M&S hasn’t resulted in any sour grapes, with M&S products continuing to be well received and consistently constituting over 25% of the average basket.

“While there will inevitably be changes to demand once life returns to some semblance of normality, Ocado remains well positioned to capitalise on the permanent shift to online grocery. And looking forward, as travel restrictions ease, they will be able to sign new deals and partnerships, most likely in the second half of this year, as international partners remain interested in Ocado’s technology offering. Further deals for their leading technology from new and existing partners should act as a positive share price catalyst.

Energy news: National Grid is acquiring the UK’s biggest local electricity distribution company, Western Power Distribution, as part of a move to increase its exposure to electricity amid the push towards cleaner energy.

It is also planning to sell a majority stake in National Grid Gas, as part of a strategic ‘pivot’ to electricity.

National Grid says the move will “transform National Grid’s positioning and give us an even greater role to play in the journey to net zero”.

“When we look at the long term, we believe that the pivot that we are making today will enable us to take a much bigger role in the current energy transition.”

Reuters explains how National Grid and WPD will fit together:

Western Power Distribution (WPD) is Britain’s biggest single power network operator but under the country’s partially competitive market, it does not sell directly to end users.

National Grid owns another part of the system – the high voltage transmission network which takes energy from power plants and circulates it nationally.

Consumer campaigners are urging the government and the City regulator to intervene in a rescue scheme proposed by the sub-prime lender Amigo, saying it could enrich the firm’s directors while some of Britain’s poorest borrowers miss out on up to £1bn in compensation.

They have called on the Financial Conduct Authority (FCA) to block plans to limit redress payments to nearly a million current and former customers who were potentially mis-sold unaffordable loans by Amigo, which is the most complained about financial lender in the UK.

Consumers who lodge successful complaints to the financial ombudsman typically receive payouts that leave them in the same financial position as if they had not received the loan.

Amigo, however, has asked the courts to approve a so-called “scheme of arrangement” that would cap the amount it paid out to consumers. Its own examples suggest payouts could be worth anywhere between 10 and 23% of the total value of the loan, but refunds could be much lower depending on how many customers lodge successful claims.

The company argues it will collapse into administration if the scheme is blocked.

Here’s the full story, by my colleagues Phillip Inman and Kalyeena Makortoff: